Forest management as a tool to revitalize oak coppice forests: reactivation of carbon sinks and other ecosystem services 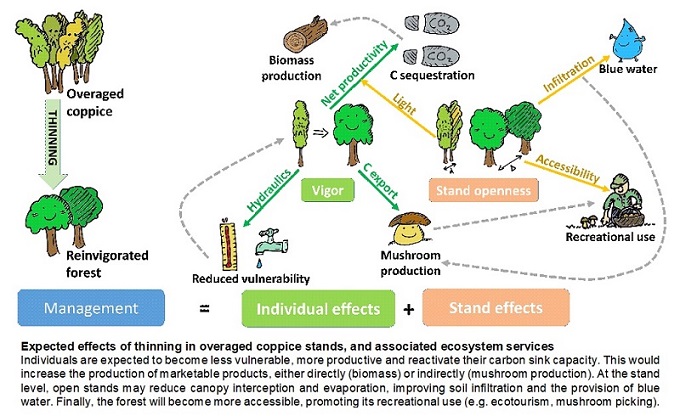 In the Mediterranean region, oaks had been extensively used as a source for fuel and charcoal since prehistoric times. The ability of these species to regenerate from the stump or roots quickly after cutting was exploited by a traditional forest management practice, known as coppicing.

Traditional coppice systems (also known as low forests, from German Niederwald) created and maintained a dense woodland with multiple stems per individual (stool) and intense sprouting. A regular cutting cycle of 15-20 years was traditionally performed in different sections on a rotation, ensuring a sustained biomass provision. In Spain, former coppice stands account for about 22% of the total forest cover, but this traditional practice was abandoned since the 1960s, due to the combined effect of depopulation and reduced charcoal demand.

Currently, these stands form a new forest landscape, keeping a high density of overaged individuals, with remarkable structural and functional problems. Overaged coppices display very small growth rates, both in terms of canopy and stem growth. The functional implications of this process are particularly striking in ring-porous species, which end up with tree rings formed almost exclusively by large, highly-vulnerable, earlywood vessels. Empirically, the traditional cutting cycle anticipated this chronical growth reduction, reactivating coppice growth. Interestingly, even largely overaged trees can be reactivated after thinning. However, it remains unclear whether this revitalization persists over time, particularly if new sprout formation is not constrained through active management or grazing.

In the last decades, thinning of abandoned coppices has been promoted, mainly under the context of forest fire prevention and adaptive management to reduce forest decline. However, the elevated labour costs of coppice thinning, together with the uncertainty about the long-term benefits of this treatment, have prevented a widespread application of these practices. In this context, our overarching hypothesis is that adaptive management of overaged coppices, originally aimed to reduce their vulnerability, also improves the carbon and water balance, and promotes multiple forest ecosystem services. We postulate that the benefits of coppice thinning go well beyond the observed growth reactivation. Therefore, in order to valorise the outcome of these treatments, and to define the optimal management plan, we should consider other indirect effects. Our ultimate aim is to assess the effect of adaptive management plans on carbon and water balance, and the associated ecosystem services, namely:

6) potential for recreational use