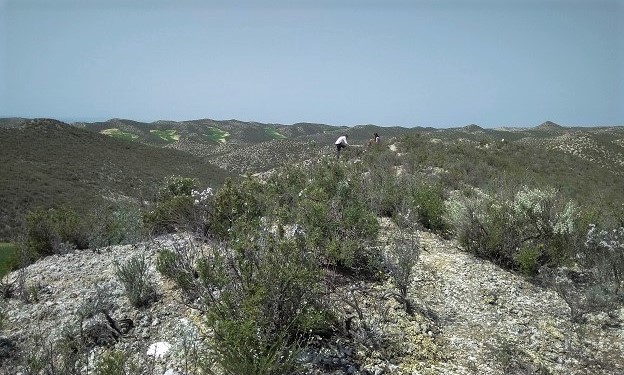 Aims: Plant communities growing along gypsum hills in NE Spain show a distinct zonation thatmay depend on water table depth, salt and nutrient availability gradients between hilltops and saline depressions. We analysed the main sources of water used by woody species in these communities. Specifically, we assessed whether hydrological niche segregation occurred among dominant woody species with different root depth and plant location along gypsum hills during spring and summer.

Methods: We analysed the oxygen and hydrogen isotope composition of the xylem water of ten dominant woody species growing along gypsum hills and compared it to water extracted from the top 20 cm of the soil, gypsum crystallization water and groundwater, both in spring and summer. Bayesian isotope mixing models were used to estimate the proportion of each water source used by different species.

Results: There was a clear segregation in the sources of water used by dominant woody species from plant communities co-existing on gypsum hills, and such segregation responded to their rooting depth and position along the hill. Shallow-rooted plants growing out of saline depressions exploited superficial free soil water and gypsum crystallization water, and had limited access to groundwater, particularly during summer. In contrast, deep-rooted plants and shallow-rooted plants from saline depressions thrived preferentially on the water table. Such differences were noticeable in spring, but became sharper during summer.

Conclusions: Woody species from gypsum hills have different hydrological niches. Niche segregation is mainly related to the depth of the root system of plants and to their position along gypsum hills, which determine proximity to the water table. It is accentuated during summer, highlighting the role of summer drought as a structuring factor in gypsum plant communities. The segregation of the water sources used by plants is related to a suite of phenological, functional and anatomical features, indicating adaptation of plant species to their respective hydrological niches.